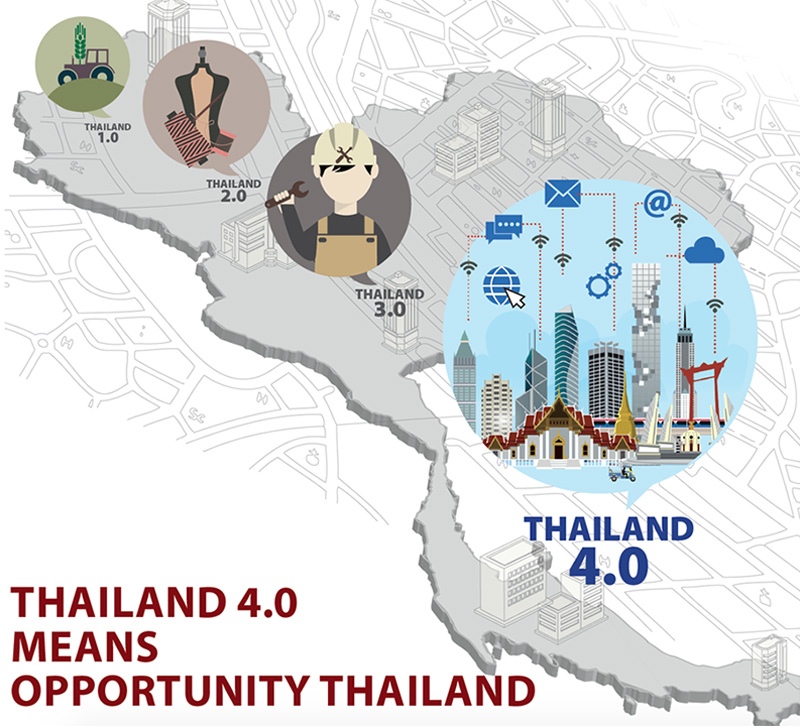 Many countries have recently rolled out innovation strategies for the 21st century. The Obama administration unveiled “A Nation of Makers” last year to support Americans to turn ideas and solutions into reality; the United Kingdoym has been promoting its “Design in Innovation Strategy” to support British businesses to innovate better and grow faster; China announced its “Made in China 2025” policy to compre-hensively upgrade Chinese industry; India has launched its “Make in India” campaign to attract capital and technological investment; and lastly, South Korea is building a “Creative Economy” to transition to an advanced innovation and new engines of growth.

Thailand, in turn, has been promoting successive economic development schemes for over 50 years, successfully becoming an upper-middle income country. From 1957-1993, Thailand’s GDP grew at a constant annual rate of 7 to 8 percent, however, from 1994 until now, growth has moderated to between 3 to 5 percent annually.

Thailand has continuously been improving its economic model, starting from “Thailand 1.0,” which focused on the agricultural sector, to light industries with “Thailand 2.0,” where the country utilized cheap labor cost with a focus on domestic productions, through to “Thailand 3.0,” which is focused on more complex industries to attract foreign invest-ments making Thailand a production hub for exports. However, under Thailand 3.0, the country has faced middle-income trap, growing disparities, and imbalanced development, major concerns which prompted the government to transform Thailand’s economic structure to “Thailand 4.0.” Under prime minster Prayut Chan-o-cha, Thailand is focusing on becoming a value-based and innovation-driven economy by moving from producing commodities to innovative products; emphasizing on promoting technology, creativity, and innovation in focused industries; and from a production-based to a service-based economy. Major investments in infrastructure are underway including railway and airport upgrades, high-speed rail, roadways and the Eastern Economic Corridor (EEC) as part of the government’s efforts to make Thailand one of the most preferred investment destinations in Asia.

The Thailand 4.0 development plan is focused on 10 targeted industries, which can be divided into two segments; developing existing industrial sectors by adding value through advanced technologies for five industries: Next-Generation Automotive; Smart Electronics; High-Income Tourism and Medical Tourism; Efficient Agriculture and Biotechno-logy; and Food Innovation. The government has targeted five additional growth engines to accelerate Thailand’s future growth: Automation and Robotics; Aerospace; Bio-Energy and Bio-chemicals; Digital; and Medical and Healthcare. The transformation and development of Thailand is a major priority for the government. As such, increasing awareness among both Thai and foreign investors is critical to highlighting the important opportunities and investment trends in the country.

The Board of Investment (BOI), as the department responsible for supporting and promoting investments in Thailand is organizing the upcoming “Opportunity Thailand” seminar to publicize Thailand’s new policies and readiness as an investment hub, increase confidence on the part of Thai and foreign investors, and showcase the potential for Thailand to the public and private sectors as it transitions to Thailand 4.0. Most importantly, Opportunity Thailand will also be organized to pay tribute to His Majesty King Bhumibol Adulyadej for helping support and develop Thai industries and the economy throughout his 70-year reign. Opportunity Thailand will take place on February 15, 2017 from 8:00 to 17:00 in the Royal Jubilee Ballroom at IMPACT Muang Thong Thani. This event will help to strengthen Thailand’s reputation and convey that Thailand is open for business in a new and exciting era of growth. Over 2,500 participants are expected to attend and the keynote speech will be given by Prime Minister Prayut Chan-o-cha.

The first session will be a speech by H.E. Dr. Somkid Jatusripitak, Deputy Prime Minister under the topic of “Growth amidst Global Uncertainties”, and will be followed by “New Incentives, New Business Environment and Thailand 4.0” by H.E. Dr. Uttama Sayanayana, Minister of Industry and Mrs. Hirunya Suchinai, Secretary General of the Board of Investment. Owing to growing competition in attracting foreign direct investment, Thailand needs to provide a conducive and competitive business environment. The Revised Investment Promotion Act and Competitiveness Enhancement Act will allow BOI to provide new and attractive incentives for investors.

The afternoon session will be starting with a speech by H.E. Dr. Suvit Maesincee, Minister, Office of the Prime Minister under the topic of “Investmentled Transformation”, which will outline how the government is translating this concept into implementation. This will be followed by a panel discussion on “Translating Thailand 4.0 into Reality”. The BOI has invited the CEOs of several leading companies working in the new target industries; including Thai companies of Charoen Pokphand Group Company Limited and Siam Cement Group Company Limited; and foreign companies of Airbus Group; Ajinomoto Co., Inc.; and Huawei Technologies; to discuss the opportunities and potential challenges in moving towards Thailand 4.0.

The final concurrent breakout sessions will cover three important sectors in the new growth engines, which are Aerospace, Automation and Robotics, and Medical Devices. Firstly, Aerospace session under the topic of “Gearing up for Real Opportunities”, this session will give companies in Thailand the chance to understand the necessary require-ments to enter the aerospace supply chain and meet with the suppliers of Rolls Royce, both in Thailand and overseas, to explore possible partnerships.

Secondly, the industry of Automation and Robotics under the concept of “Turning Threats into Opportunities”. For many industries, automation is no longer an option, but a necessity to remain competitive. This session will demonstrate how Thailand has developed local capabilities to serve the growing demand for automation systems.

Lastly, the Medical Devices – “Driving Growth through Innovation”. As Thailand has positioned itself as a medical hub of Asia, this session will indicate that the medical device industry presents excellent growth opportunities, moreover, Thailand can serve the growing domestic market and be an export production base. Major investments are being made in local medical research and development to further support product innovation. The event is now open for registration at www.boi.go.th/OT2017 For further inquiries, please contact opportunitythailand@boi.go.th or 02-553-8450-1.